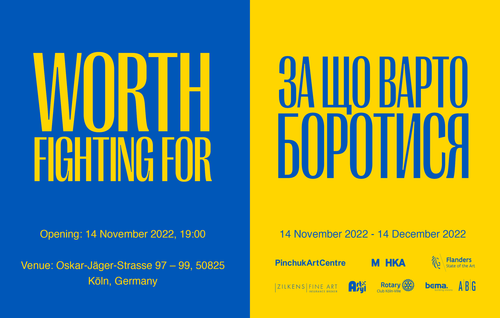 The Ukrainian fight is about the survival of a nation and its right to exist – politically, militarily, economically, and culturally. When the Russian invasion started, Western Europe responded with an amazing wave of support for its neighbouring country, justly considering it part of the European community, yet to this day, Ukraine as a culture remains barely known to many European citizens.

After the invasion had been launched, the PinchukArtCentre, the leading Ukrainian contemporary Art museum, teamed up with the Antwerp contemporary art museum M HKA to address not only immediate urgencies but also strategic challenges.

This war is not the end, not even a means to an end. The resistance and assistance are propelled by what may come after. On the most basic level, this implies that Ukraine and Western Europe get more acquainted, and in a second step, that their capacities start to enhance one another. Finally, it may also be about a joint understanding, joint imagination, and values.  The horizon – just as the war and the aid – is therefore essentially a cultural one.

Art may offer a vital space of reflection for this, for Europe to better understand the vital and vibrant Ukrainian art scene as part of an international ecology, but also for Ukraine to keep seeing itself as part of a wider world. When re-opening the PinchukArtCentre in June this year, the partnership came to address a country at war;  much more than a war zone, also a place where life and culture continue. This was the prime challenge. The outcome was an exhibition presenting a dialogue between an international selection of the M HKA collection, chosen because of their empowering and emancipatory capacity, a collection of recent works from Ukrainian artists, mostly produced in times of war. The project included the Russian War Crimes exhibition, as an unavoidable reference.

This exhibition now finds a second iteration in Cologne. And this is how it has to be; sharing thinking in a shared space. For Cologne, the dialogues have been reedited in seven spaces. They start with the landscape of war, immediately followed up by the space of world making,  notions of landscape and everyday life, the double helix of the collective and individualism. And they conclude by weighing up the catastrophe of the Russian war crimes images against the potential of relevance of art.


A Historical Landscape of War

A Historical Landscape of War (with a reflection by Yevhenii Monastyrskyi)

The point of departure for the opening space is a historical landscape of war, positioning the current Russo-Ukrainian war in relation to the First and Second World Wars. Yarema Malashchuk and Roman Khimei bring together Berlinde De Bruyckere’s reflection on physicality (WWI) and Jan Cox’s psychological challenge (WWII) with the layered digital reality of today and its unresolved tension between real and fake, between experience and framing.

Catastrophe and The Relevance of Art

Art transcends the moment and situationalism. It has a proper autonomy, not in an abstract, detached sense but through its capacities of connection to reality. As in the video work of Oleksiy Say, it may sometimes allow to directly deal with the catastrophe. Art, however, always moves beyond the moment it initially addressed. It suggests ways to come to terms with experiences.

Individualism (with a reflection by Katja Petrowskaja)

The individual stance, if relevant, is also a critical position towards the collective. It then always combines an outspoken, emancipated and principled position with physical experience and creates a particular awareness. The symbolical goes hand in hand with the bodily, as Vlada Ralko so clearly expresses.

Landscape (with a reflection by Masi Nayyem)

Ukraine combines vast open horizons with industrial urbanism. This landscape is continually re-interpreted in the present by the collectives of people inhabiting it, as Nikita Kadan shows, while the imprint of its past continues to impact behaviour, as Oleksandr Burlaka points out.

Space of World Making (with a reflection by Taras Kachka)

Any meaningful relation to the world today is ineluctably multi-faceted. In his reflection on the Soviet heritage, Danylo Galkin points out how for Ukraine this relation, beginning in a historical awareness of self, has resemblances to the decolonialist discourse of the Global South. The desire to create cultural localisation today must be negotiated in terms of the global relational of materials, exchanges and ideas.

Otobong Nkanga
I am Euromental, 2015

The Power of The Collective

The collective can be both uplifting and deeply frightening. Lesia Khomenko builds on the vital power of the collective that is historically present in the Ukrainian social space, most recently manifested in the Maidan uprising and today’s effort of resistance, essentially energised by real relations between real people. This power can also result in sheer destruction, as shown in the bombing clouds by Oleksiy Say.

The Primacy of the Everyday

The Primacy of the Everyday (with a reflection by Yevgenia Belorusets)

Anna Zvyagintseva celebrates the unheroic ordinary gestures which go unnoticed in the everyday life. War as such is opposed not so much to the vitality of life as to the quality of the ordinary as the fabric of social existence.