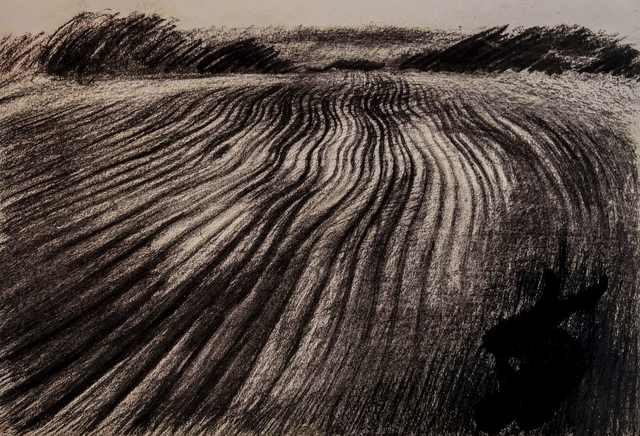 “In the middle of March, I started drawing black ploughed soil with a human figure lying on top of it, over and over again. Or, if we look at it another way, a horizontally aligned human silhouette overlaying a picture of soil. The motif is concretised through repetition. It has been repeated dozens of times from March until today. This motif has certainly been inspired by: the image of Ukraine’s “fertile soils”, together with all related colonial connotations; photos of the invaders’ corpses and the famous narrative of sunflower seeds in their pockets*; photos of their victims; makeshift graves in agricultural land plots; trenches turned into mass burials; land pollution caused by the war; tomorrow’s famine; bodies yet to be discovered; the “poisoned landscapes.”** I define the figure overlapping the earth on those drawings as a shadow. While soil absorbs, a shadow stays on the surface. A shadow marks places and times where and when, for the umpteenth time, human life ceases to be the ultimate value. In addition, a shadow cannot be hidden under a layer of earth, concealed or erased in any other way.”