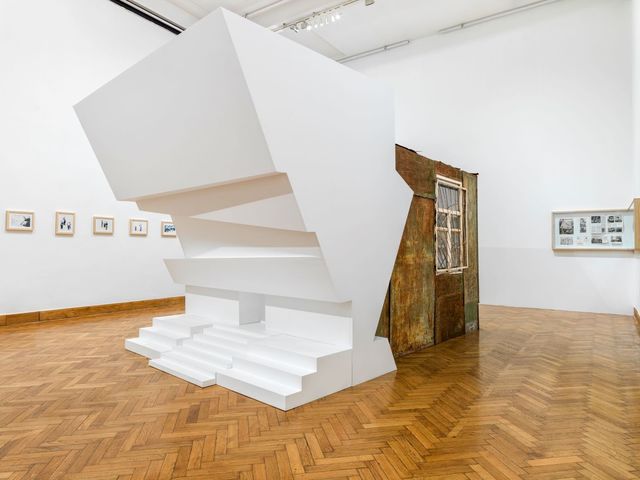 'Europe is an important part of Ukrainian History, just as Ukraine is a part of European history', writes Serhii Plokhii. Let's imagine it.

This emergency exhibition in Bozar's Council Room was part of a triptych, with other chapters in the European Parliament and M HKA. They all started from the Ukrainian artists in the collection of the Flemish Community.

The perspective taken in Bozar is the tension between grand narratives and life's anecdotical moments, as thematised in the signal work of this exhibition, Nikita Kadan's 'Little House for Giants', that juxtaposes a shabby shed with an abstract, constructivist shape. Likewise, Kadan's 'Chronicles', based upon historical photos of acts of violence on the territory of present Ukraine, makes the images turn away from the histories they illustrate today, towards a fundamental awareness of violence committed on human beings.

Oksana Shachko, the Ukrainian founder of FEMEN, left a small oeuvre of anti-icons, somewhere between the spiritual and the profane, addressing the institute claiming this spirituality: the church, a key actor in the present war. Lesia Khomenko thematises the most evident key institution these days: the army. She relates the artist's look  to  military optics, the sniper's gaze to the role of digital images in the war.

Sergey Bratkov photographs show, on the one hand, self-conscious young women in the ballistic section of Ukrainian's military school; on the other, boxers after they won their fight, empty, now the heat of the moment has passed. Since 2012, Anna Zvyagintseva has been taping the sounds of very diverse demonstrations in Ukraine. She puts them in a cooking pot, and crochets a prison against corruption, fragility against harsh power.

In 2016, Alevtina Kakhidze, famous for her reporting on the Donbas war, was invited for the Moscow Bienniale. There, Kakhidze made daily newscasts on the future,  on the daily life at the biennial, and on the war, widely ignored at that time.