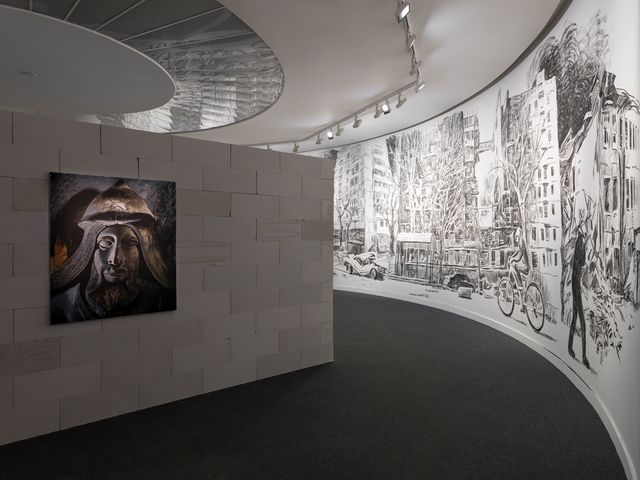 The exhibition at M HKA presented the vital Ukrainian art scene from the perspective of art as a critical instrument.

Nikita Kadan attaches a Soviet star to a Portuguese coloniser’s sculpture from Benin. In a recent video, Sergey Bratkov shows his brother, an architect living in Kharkiv, who measures a dilapidated building. In the spirit of the Maidan Revolution, Davyd Chychkan reflects on his society’s future, inspired by the forces that were active in the — that existed from 1917 until the Soviet victory in 1921 –, with the black of anarchism (for an anti-authoritarian future), the red of socialism (for social equality), and the purple of feminism — for a culturally progressive horizon. He interweaves these with the colours, symbols and heritage of Ukraine. Its counterpart is the wall drawing Landscape with Staffage by Anna Scherbyna.

Another core element of the programme is See Ukraine, a film programme with videos by young Ukrainian artists, shedding light on current issues of identity and the relationship with past and future. The programme is introduced by the song Obiymy [Hug Me] by Svyatoslav Vakarchuk and the Akustikos Art Group, recently recorded in the ruins of Palats Pratsi [the Palace of Labour] in Kharkiv.

To add a playful element, on the other side of the library Alevtina Kakhidze’s The Most Commercial Project is also shown. Kakhidze investigates ideas of value, materialism, possession and consumption by imitating clothes she likes, then selling them at the clothes' original retail price.

The campaign image of Imagine Ukraine was created by Nikolay Karabinovych.