The Power of The Collective 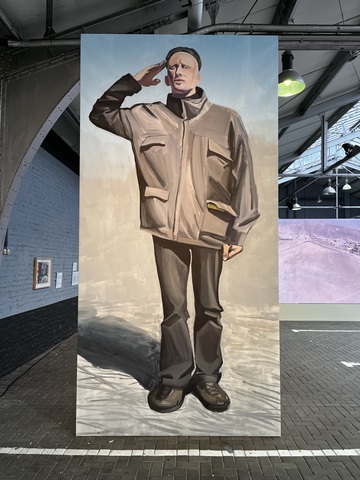 The impossible image. Khomenko paints from forbidden photographs taken by her husband. Four monumental paintings of volunteering soldiers: an IT-engineer, a chemist, a lawyer, and an artist. Photographs have become a dangerous tool of communication, sharing might give the enemy intelligence for an attack.

While the photograph risks revealing too much information, it fails to touch reality all together. The real image of war cannot be expressed, a photograph remains a vague, accidental and partial impression of the real. Khomenko's paintings expand the photograph, they include the impossibility of the image itself while making the protagonists larger than life. They are heroes to all Ukrainians, nameless and undepictable.

The starting point for the Max in the army series by Lesia Khomenko was a photo portrait of her husband, Max Robotov, made after he joined the army and she with her daughter evacuated from Kyiv. "For me it was like teleporting my husband, an attempt to make him closer", says the artist.

Now that Khomenko has established this teleportation channel between herself and the war, she keeps it open. She continues to depict her husband's military comrades, using the pictures taken by him in the army. For Lesia, this collaboration is a way to be involved in her husband's struggle, and also a way for the couple to maintain an artistic dialogue as they would have done previously, in spite of Max's new military reality.

Working on this series Khomenko reflects on the role and status of the image, which in the context of war literally became a lethal weapon. Is it possible to disarm it through painting and transform it into something else — a love letter perhaps?